In the co main event of the evening, in another rematch, Leandro “El Pumita” Silva defeated Argentinian flyweight champion, Junior “El Demonio” Zárate, by split decision after ten rounds, in a bout in flyweight division, and also took revenge in the third fight between each other, after two exciting clashes won by unanimous decision after eight chapters by the Zárate.

In one of Argentina’s biggest upsets, Pérez, 31 years old, from José Mármol, Buenos Aires, took advantage of his better preparation, physical condition and stamina to suprass Lovera, who was far away from the level shown in past performances, and had his revenge after their first clash on August 18th, 2018, when Lovera won by majority decision after six rounds in Cutral Có, Neuquén.

This time, Lovera, 25, from Goya, Corrientes, based in San Miguel, Buenos Aires, started aggressive the first two chapters making good use of his height and longer reach to connect his left and right crosses and hooks to the head. From the third round onwards, Pérez showed his correct footwork and mobility to go in and out of the short and middle distance and impacted fast jabs and crosses to the face. With his greater power, “Monzón” put pressure and connected his hooks to the body and crosses to the head, but lacking of continuity. Added to his opponent’s footwork, he missed his punches and “El Picante” took advantage of it working inside with his crosses to the jaw, always leaving the actions quickly. Although there were few heavy and sharp blows, Lovera decreased his activity, and Pérez kept following to the dot his game plan, touching and leaving the actions. The difference of the bout was cleary shown by the physical condition that allowed the Buenos Aires native to rule the second half of the fight against Lovera, who lost his undefeated record, at a major upset.

The scorecard expressed the difference shown on the ring, as they were announced: Javier Geido 87-84, Jorge Gorini 86-85, and Jesuan Letizia 87-84, all for Pérez.

With this result, Pérez, who weighed 168.4 lbs., who had defeated Gonzalo Andreasen and Gustavo Domínguez Chamorro, and after losing to Lovera on May 17th, 2019, was stopped by undefeated Canadian Lexson Mathieu in Montreal, Canada, got his best victory, and moves on to 6 victories (2 KOs) and 3 losses. Lovera, 174.8 lbs., who had defeated every opponent such as José Yana, Pérez, and Jorge Caraballo, and came after destroying Juan Rizo Patrón in two rounds to conquer his national belt on October 25th, 2019, remains in 14 victories (11 KOs), 1 defeat and 1 draw.

In the co main event of the evening, in another rematch, Leandro “El Pumita” Silva (111.2 lbs. and 6-6-3, 3 KO) defeated Argentinian flyweight champion, Junior “El Demonio” Zárate (109.7 lbs. and 14-3, 5 KOs), by split decision after ten rounds, in a bout in flyweight division, and also took revenge in the third fight between each other, after two exciting clashes won by unanimous decision after eight chapters by the Zárate, on September 21st, 2018, in Quilmes, Buenos Aires, and November 13th, 2020, in Luis Guillón, Buenos Aires.

The scorecard were: Jesuan Letizia 96-93 for Zárate, Javier Geido 96-94½ for Silva, and Alejandro Bokser for 96-93. Zárate was deducted one point in the ninth round round by referee Rubén Figueroa.

In another upset, Zárate, 31, from Ibarreta, Formosa, based in Florencio Varela, Buenos Aires, former Argentinian amateur national team and former WBA super flyweight champion, dominated the first half of the fight connecting sharp crosses to the head and hooks to the body. In the second half, Silva, 28, from Coronel Du Graty, Chaco, based in Buenos Aires, managed to answer and impacted also to the face, making the path of the bout slightly even.  And in the last chapters, with the defenses rather low, both exchanged vicious barrages in the short to the upper zone, ending an interesting clash, worthy of a fourth edition.

Beyond the main fights, a heated card completed the night. In welterweight division, Cristian “Azteca” Ayala (145.9 lbs. and 4-1-1, 1 KO), from Misiones, based in San Miguel, Buenos Aires, dominated Santiago “El Tren” Sánchez (146.8 lbs. and 5-2, 2 KOs), from Mar del Plata, Buenos Aires, by unanimous decision after four rounds, and after Sánchez received a standing count in the first episode. The scorecard were: Jorge Gorini 39-37, Javier Geido 40-35½, and Alejandro Bokser 40-36.

Finally, in another rematch, in super lightweight division, Federico “El Tano” Schinina (138.5 lbs. and 2-0, 1 KO), from Buenos Aires, crushed Gabriel “La Máquina” Molina (140.4 lbs. and 0-3), from Roque Sáenz Peña, Chaco, by a strong technical knockout in the first round, after sending him down twice and in thefollowing action referee Carlos Gómez stopped the bout due to lack of response. This way he repeted his victory of last February 1st, when Schinina scored a four round unanimous decision in Los Polvorines, Buenos Aires. 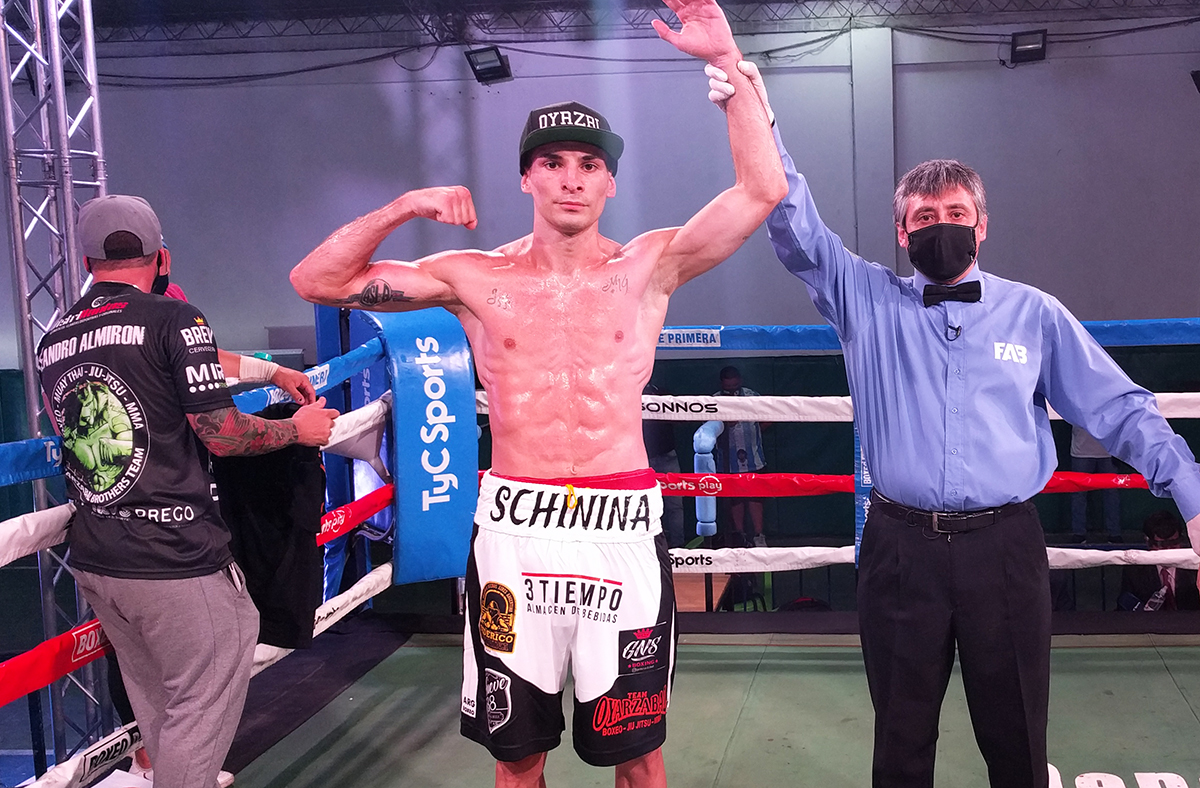