Home / News / Peralta-Karalitzky, Luques Castillo-Pedraza, the return of boxing on 10/30
In
News 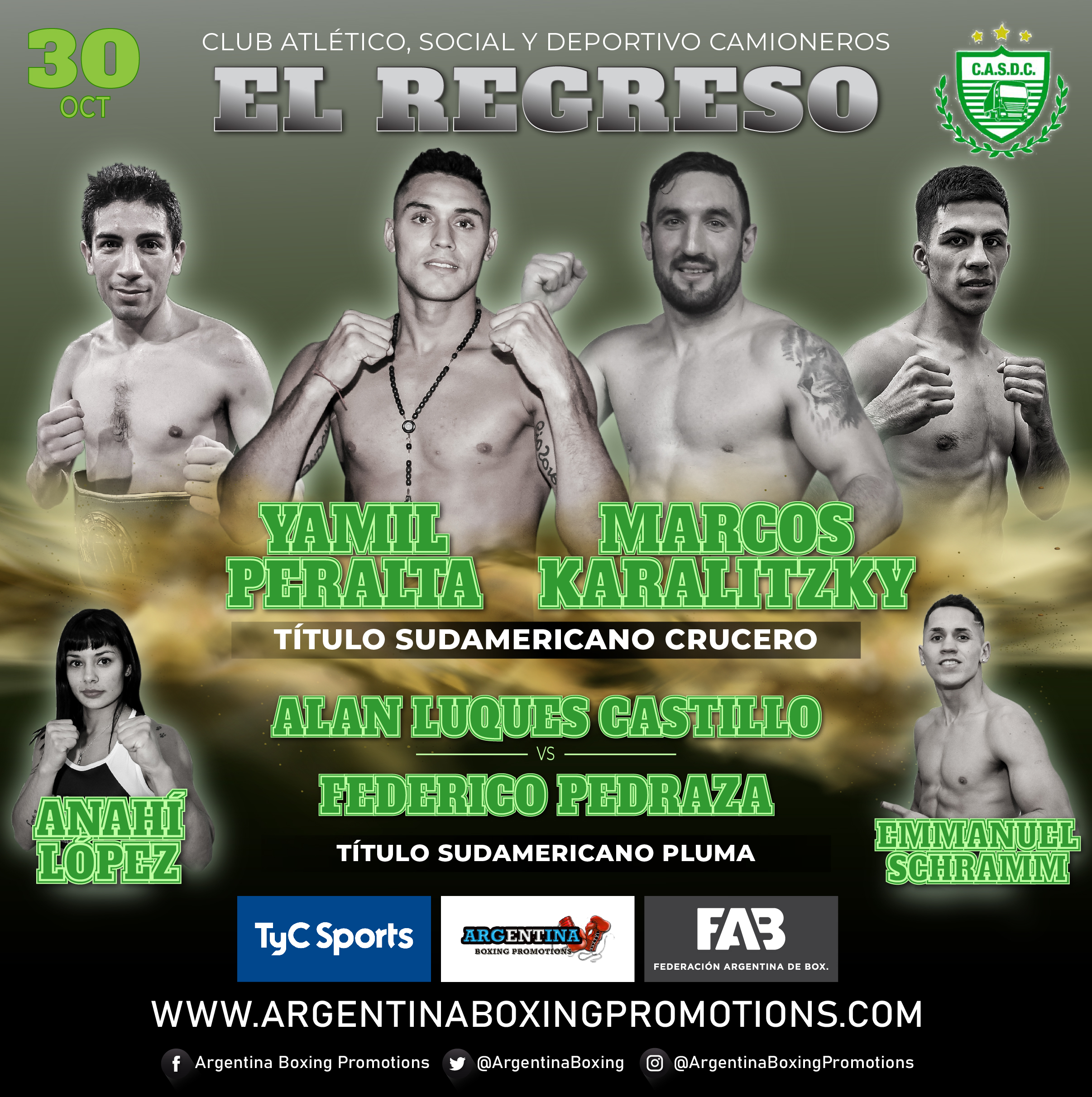 The event will mark the awaited return of boxing in Argentinian soil since the irruption of the Coronavirus COVID-19 pandemic, and will be in charge of the same company that promoted the last boxing show in the country, on March 13th in Buenos Aires. After months of hard and silent work the sport will have its long-expected resumption, in a show behind closed doors for the public, with the strictest security controls following the health protocols issued by national and municipal health authorities, as well as the Argentinian Boxing Federation.

“We are very happy to return. While some people just talk, we have been working silently for a long time, so that our sport can gradually and, above all safely, return. It has not been easy, but it is an honor for us to be in charge of the resumption of boxing activity”, said Margossian.

“We want to thank the support and trust given to us by the national and municipal authorities, as well as the immeasurable support of TyC Sports. We are confident that this will be the first of many post-pandemic events that we will promote”, he added.

In what is expected to be an action packed fight, Peralta (6-0, 2 KOs), 29 years old, from Del Viso, Buenos Aires, Argentinean representative in London 2012 -where he reached quarter finals- and Rio de Janeiro 2016, #1 of the Argentinean cruiserweight ranking and #22 WBC, who on May 11th, 2019, dethroned Marcos Aumada by unanimous decision to conquer his WBC Latino belt that after beating Esteban López he defended in the rematch over Aumada, will put on the line the South American crown he obtained on February 1st when he destroyed Darío Balmaceda by a strong technical knock out in the ninth round in Los Polvorines, Buenos Aires. Now he will face Karalitzky (7-3-2, 2 KOs), 31, from Temperly, Buenos Aires, #8 of the Argentinean light heavyweight ranking, who after beating Gustavo Domínguez Chamorro and losing on points against Russian puncher Artur Ziyatdinov in Canada, comes after December 13th defeating Damián García by unanimous decision in Temperley, and yearns for his biggest victory.

Luques Castillo, 29 years old, from Córdoba, #2 of the Argentinean featherweight ranking and former WBC Latino super bantamweight champ, with a vas experience defeating Leandro Esperante, Lucas Báez, Fabián Orozco, and losing against top names such us Mexican  Diego De La Hoya, Irish Anthony Cacace -in London-, and Kazakhstan’s Stanislav Kalitskiy -en Russia-, will put on the line the belt he conquered on August 19th, 2017, defeating in a rematch Julián Aristule by unanimous decision, and he retained over Gastón Bustamante, Esteban Stodulski -twice-, and Kevin Acevedo. Now he’ll face the young Pedraza, 24, from San Martín, Buenos Aires, #1 of the Argentinean featherweight, who has defeated every opponent including Matías Leiva, Sergio Estrela and Mauro Barrios, and comes after October 18th, 2019, when he beat Aristule by split decision in Cutral Có, Neuquén.

Beyond the main fights, a heated card is being prepared to complete the night. World Boxing Organization (WBO) world flyweight champion, unbeaten star Anahí “La Indiecita” López (16-0-1, 1 KO), from Junín, Buenos Aires, will face an opponent to be determined, in a bout scheduled to six or eight rounds.